Communication is one of the key factors to success in organizational change. But … how exactly do you give shape to that? The storytelling model we developed for change communication is a valuable answer to this question. It provides a guiding communication strategy to achieve connection and movement in all phases of a change process and to monitor the effects of any action that is taken.

Please feel free to contact us to find out how business storytelling can help you to support and facilitate change:

(Do you wish to use storytelling in a different way? Please contact us: annet@thestoryconnection.nl)

Is your organization, department or team on the verge of change? Or is a change process about to stagnate? Use connecting change communication for a flying start or in order to turn the tide. Learn how to work with storytelling yourself or let us help you.

Become a skilled and certified StoryPractitioner

Achieve a deep understanding and learn to work skillfully with stories and storytelling in change – as a leader or as an advisor.

A leading and appealing vision story gets people throughout the organization moving – in the right direction! Dozens of organizations that have developed a vision story or strategy with our method in recent years have experienced this. How do you develop such a crucial and indispensable story with your organization, department or team?

Learn to understand the undercurrant

Do you need insight into what is going on deeper in the organization? What stands in the way of a change or what is able to boost it? A short undercurrent investigation adds valuable information to the more rational management information.

Feel free to contact us to learn more annet@thestoryconnection.nl

Change needs stories. Stories in which employees themselves have the leading role. Stories they recognize and that inspire them. That way, change does not remain ‘a paper tiger’, but rather becomes a process that people want to commit and contribute to.

As in this story of the World Bank: in 1996 the organization faced a change process. No one but the leadership seemed to be thrilled about the idea of change. Project leader Stephen Denning had used one blazing PowerPoint presentation after another, full of irrefutable figures and facts. In vain.

The impact of a small story

Up until the moment he told a short, true story. That touched the right cord. People recognized his frustration, but also his enthusiasm. That was the beginning of a turnaround. His story was shared and retold. Finally, the question ‘WHY do we have to change‘ made way for ‘HOW are we going to change’. Denning characterized this as: people came to a ‘next level of understanding‘. And the story that caused this breakthrough he called a springboard story.

Get rid of two important obstacles to change

Stories have the power to disentangle a process that is stuck. And that actually makes perfect sense, because stories can ’tackle’ the two major obstacles to change: ambiguity or vaguenss and unfamiliarity. Again and again, research (De Caluwé / Mastenbroek, Verandermonitor) and evaluations in The Netherlands confirm that organizational changes fail because

Business Storytelling focuses specifically on these two obstacles. Stories make visible and clear what truly matters to employees and they give management valuable insight into what is really going on. Only then can ‘Why‘ change to ‘How‘. Resistance can now make room for commitment and movement. 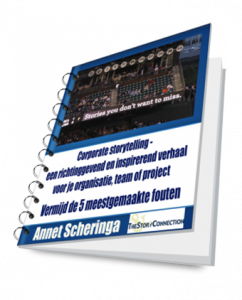